There’s No Faith In Fear

There is No Faith in Fear

I’m often asked, “how did you manage to stay so strong during the darkest moments of your life?”  The answer is simple: gratitude and faith. I hung on to those concepts for dear life when the world around me was spinning out of control. See my picture-perfect family, living in the big beautiful home with two happy and healthy babies was now in shambles. The fear of losing everything I had held close to my heart was now a reality. I learned that my once doting, completely in love husband was living a secret life. This life included gambling, pornography, excessive drinking, abuse of prescription medication and the worst blow of all, emotional intimacy with other women. While I went to extreme measures to save my marriage (something I never imagined doing after all this pain), I knew when the environment became unsafe, I needed to put my evacuation plan in motion. I couldn’t risk the unknown when I discovered my husband had brought a gun into the house and threated to kill himself while my babies slept in nearby rooms. Nor could I stand the reoccurring thought of coming home and finding him dead on the floor. So, my escape plan included a way out, a new life for my children, in a new home, a new town, and a completely new way of surviving.

Need I mention at the same time this chaos was occurring, my mom was diagnosed with stage four cancer. She had been sick for some time, but we didn’t have a diagnosis. See, my mom didn’t have health insurance, so we were left to self-diagnose until it became too much to handle. The day she keeled over while walking to the front door was the catalyst that initiated us finding a plan and paying for her health insurance. The first day she was able to see the doctor, she was in his office. That was the same day she was rushed to the emergency room for three blood transfusions. They eventually discovered a tumor the size of a basketball had been forming inside of her. She was diagnosed with colon cancer, and after surgery, the cancer spread to her lymph nodes. It was five years of touch and go before we finally got the green light.

Between supporting my mother with visits to the hospital and caring for two young ones, I didn’t have time to panic; I didn’t even have time to feel. I just went into robotic mode and cast aside the fear and worry that typically accompany these sorts of situations. Eventually I was able to transform my numbness into faith. This is where I began to truly believe in the purpose of life and the reason for our struggles. Instead of fearing what was to come, I decided to have faith in whatever outcome may emerge. If I believed there was a plan for our lives, I had to accept this tragedy was part of it. It was a miracle that my mom survived; however, my husband, who eventually became my Ex, took his own life.

I held on to the gratitude that my mom’s life was spared, and I did my best to make sense of my children losing their dad. I went into an intense journey with my thoughts of life and purpose. If I were to maintain my faith, I had to eliminate the fear as there is no faith in fear. How was I able to do that, you ask?  I recognized the bonds I had created with my children grew stronger every day, and I had such an appreciation for my mother’s survival. I focused my thoughts on the gifts and recognized how to find light through the darkness. I forgave my husband for taking his life and leaving me alone to raise two children, and I thanked him for presenting me with incredible clarity regarding what was truly important in life.

This tragedy allowed me to view life through a different lens. I no longer looked for the big moments to bring me joy; instead I became very cognizant of the simple pleasures, my son singing alone in his room, my daughter making little “morning to do lists” that mimicked the same format I used for my daily routine. I even found ways to make tweaks to the mundane annoyances of life. For instance, instead of fretting that I had to empty the dishwasher, I was thankful that I had a working appliance to clean our dishes. Instead of feeling like a victim that I was raising my children alone, I focused on all of the blessings around us: a nice comfortable home, food to eat, a car to drive, but most important, a love and bond with my children that was like nothing I had ever felt.

I’m not trying to say that I made this adjustment from fear to faith and never had a setback; I still had wounds from childhood that surfaced and reminded me that I was human. The difference was that I took time to acknowledge these fears and put them in their place. When I worried about money, I challenged that thought with the fact that we had never wanted for much, and I always had a job that paid the bills. I also solidified this thought with the idea that if I believed in my purpose and knew there was a plan for me; then, there were no wrong moves. Everything was leading me to the person I was meant to be, scars and all. 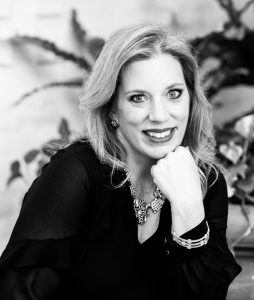